Join in for a lively a conversation to celebrate the launch of Dr. Krystale E. Littlejohn's new book, Just Get on the Pill: The Uneven Burden of Reproductive Politics. 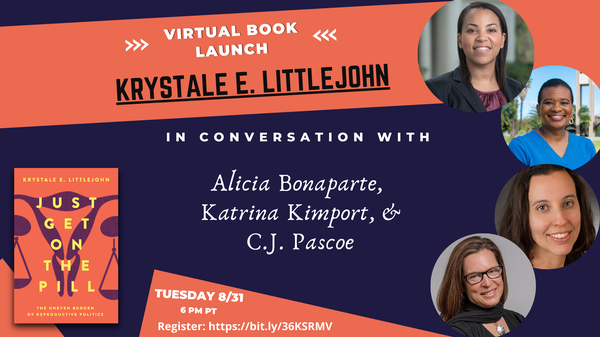 Thank you for your interest!

About Just Get on the Pill

The average person concerned about becoming pregnant spends approximately thirty years trying to prevent conception. People largely do so alone using prescription birth control, a situation often taken for granted in the United States as natural and beneficial. In Just Get On the Pill, a keenly researched and incisive examination, Krystale Littlejohn investigates how birth control becomes a fundamentally unbalanced and gendered responsibility. She uncovers how parents, peers, partners, and providers draw on narratives of male and female birth control methods to socialize cisgender women into sex and ultimately into shouldering the burden for preventing pregnancy.

Littlejohn draws on extensive interviews to document this gendered compulsory birth control—a phenomenon in which people who give birth are held accountable for preventing and resolving pregnancies in gender-constrained ways. She shows how this gendered approach encroaches on reproductive autonomy and poses obstacles for preventing disease. While diverse cisgender women are the focus, Littlejohn shows that they are not the only ones harmed by this dynamic. Indeed, gendered approaches to birth control also negatively impact trans, intersex, and gender nonconforming people in overlooked ways. In tracing the divisive politics of pregnancy prevention, Littlejohn demonstrates that the gendered division of labor in birth control is not natural. It is unjust.

Pre-order Just Get on the Pill